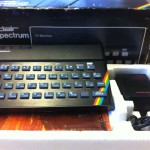 I inherited a boxed 48K Spectrum from my father-in-law a couple of years ago. Much to my delight it was in mint condition. It looked like it had hardly being used.

You can imagine my disappointment when I plugged it into the TV and it booted up with the familiar flashing corruption on screen rather than the expected “© 1982 Sinclair Research” waiting expectedly at the bottom of the screen.

I say familiar, because I know what’s happened to this. It looks like someone has either unplugged a peripheral or somehow shorted out the expansion port on the back whilst the unit was plugged in. 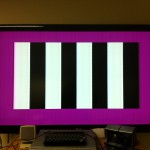 The expansion port directly exposes most of the Z80 and a chunk of ULA lines. Chances are that the blue smoke has escaped from at least one of those chips.

But, I’m not going to let a little thing like that get in the way of repairing this perfectly fine example of 8 bit computing. There appear to be plenty of online suppliers that offer tested Z80 and ULA chips and I’m sure that I can get hold of RAM from the museum if I ask nicely enough.

There are also plenty of good repair guides on the Internet that will walk you through checking which chip is faulty with nothing more than a steady hand and a multimeter.