This blog started off as my homage to the humble Sinclair Spectrum, a computer that inspired a generation of programmers, and launched a thousand careers. It is a computer born of the 80s, which lives on in the hearts and minds of hundreds of enthusiasts today,  with emulators aplenty running on systems as diverse as mobile phones and PCs, and new hardware being built using current technology and *that* rubber keyboard.

It has now expanded to include all manner of retro-gaming technology with guides on programming in assembly language including libraries of useful software routines for the Spectrum and Spectrum Next, helpful tips on diagnosing problems with retro-computers from Acorns to ZX81s, and even a series on building a computer from scratch on breadboards.

You can usually find me over on Twitter, and I post occasional videos on my YouTube channel. My project files are over on GitHub; ZX Spectrum and Next assembly language libraries and demos, and build files related to the BSX Z80 Homebrew computer. And finally, I have a Ko-Fi account if you like what I’m doing and fancy making a small donation for the cause. 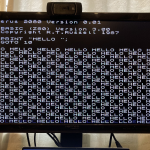 In the previous post I mentioned at the end that the BIOS, running on the ATMega328p, was only capable of communication one way. There are a couple of mailbox memory locations that are used to pass keystrokes to the 8-bit CPUs (Z80 or 6502), yet no way of receiving data back, other than an acknowledgement that the keystroke has been processed. In order to make the BIOS a bit more BASIC-friendly, I needed to add … END_OF_DOCUMENT_TOKEN_TO_BE_REPLACED 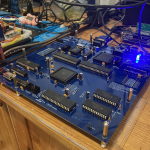 First, an introduction. Near the end of July Bernado Kastrup (aka The Byte Attic) put a shout-out on Twitter: A few of my followers suggested I was that man, given my previous experience porting R.T.Russell’s excellent BBC Basic for Z80 to my BSX homebrew and the Spectrum Next. Although the prospect of a shiny new toy to play with was tempting, my projects are backing up, and I would probably not get started on this … END_OF_DOCUMENT_TOKEN_TO_BE_REPLACED 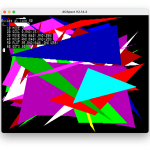 Since the last update, I’ve added a substantial number of new features to BBC Basic for Next The built-in Z80 assembler now supports the additional Z80N opcodes Realtime clock support (if fitted) Three additional video modes Line, circle, and filled triangle graphics primitives via PLOT and LINE commands VDU command now works SOUND command now works File I/O via esxDOS Improvements to the BASIC editor In addition to these features, there have been a number … END_OF_DOCUMENT_TOKEN_TO_BE_REPLACED