I’m back on the case now repairing my faulty Spectrum after a couple months away from the project and am quite keen on wrapping this up fairly quickly. 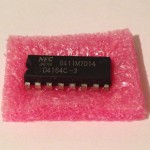 I’ve finally found a reliable supplier of RAM chips (through the World of Spectrum forums), a very helpful chap called Ben Versteeg, who has a quite interesting Spectrum related website.

Ben suggested I replace the faulty TMS4532-20NL3 with a 4164 chip as they are compatible with my Spectrum’s motherboard and have a better tolerance of voltage levels. If you are replacing RAM chips it’s important you select the correct type, so read my notes here on 32K chip compatibility). Cost for a 4116 including postage is £3.00.

I’m going to get a replacement keyboard membrane (this fits under the rubber keys) as the one I have is suffering from brittle ribbon cables due to age. New ones can be purchased from RWAP Software for £15.

Finally, to bring this Spectrum screaming and kicking into the 21st Century, I’ve decided to do the popular Composite Video conversion detailed on Womble’s Retro Repair Shack. This is a no-cost upgrade and will mean the Spectrum will plug straight into any modern TV that has a composite video input.

Anyway, the parts are on order and I will update this post when I get around to fitting the mods.

I’ve done the composite video modification first, as it will make it easier for me to test future repairs.

Soldered in a chip socket that I purchased the other day and powered the Spectrum up. It powered up fine, which was encouraging, but the keyboard ribbons finally gave up the ghost, so I couldn’t test if it was now recognising the top 32K of RAM.

Had to take the keyboard apart and take out the membrane (well, I would have to do that anyway if I’m to replace it) and trim the ribbon cables right down. Unfortunately, testing the RAMTOP system variable returned the value 32767 indicating that it was not recognising the top 32K of RAM, so I’ll have to dig the oscilloscope out later and try to track down the problem. It’s probably an issue with my soldering or a problem with the replacement chip!

By poking and peeking the first faulty memory location (32768) and using the method for diagnosing faulty RAM on this site it looks like IC20 (another 48K chip) is also faulty. I will know more once I’ve dug out my trusty oscilloscope!