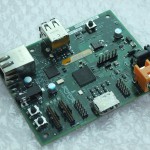 I’ve been following the Raspberry PI project for a while now on the Internet, partly because it harks back to the golden age of cheap microcomputers for all and partly because one of the trustees is David Braben, he of “Elite” fame on the BBC Micro.

Take a ganders at their web page; the system is based upon a Broadcomm BCM2835 SOC (System On a Chip) that itself utilises a custom GPU and an ARM core clocked at 700Mhz; the kind of thing you’d find in a tablet or high end mobile phone. The history of the ARM processor is worth a read; the architecture was developed from the RISC chip used in Acorn Archimedes, Acorn being the company that developed the BBC Micro.

The board itself is quite neat; apparently the finished boards will be about the size of a credit card. All storage is on SD card and the system has composite and HDMI output as standard. There are two variants; the more expensive “Model B” will cost $35 and will include an Ethernet port; the “Model A” is a mere $25!

The aim of the project is to make computing accessible and fun; something that has been missing for a while. If it takes off, it may even encourage a new generation to get their hands dirty programming. Given the board has lots of I/O, it is also a brilliant board for interfacing with all kinds of fun stuff (think Lego Mindstorms).

The system itself will run Linux; I believe that a spin of Fedora is being prepared for it. Running on an Open Source OS can only be a good thing.

Needless to say I will be purchasing one of these boards as soon as they become available; partly for work (it looks like it’d make a great media player) but mostly so that I can fiddle with probably one of the most interesting computers I’ve seen this decade!